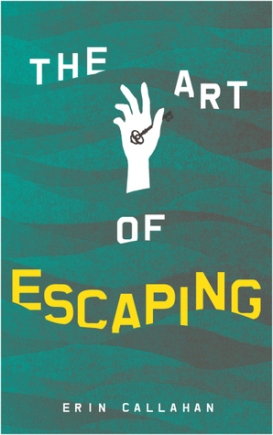 Synopsis: Seventeen-year-old Mattie has a hidden obsession: escapology. Emphasis on hidden. If anyone from school finds out, she’ll be abandoned to her haters. Facing a long and lonely summer, Mattie finally seeks out Miyu, the reclusive daughter of a world-renowned escape artist. Following in Houdini’s footsteps, Miyu helps Mattie secretly transform herself into an escapologist and performance artist.

When Will, a popular athlete from school, discovers Mattie’s act at an underground venue, Mattie fears her secret persona will be exposed. Instead of outing her, Will tells Mattie a secret not even his girlfriend knows. Through a blossoming friendship, the two must find a way to express their authentic selves.

Told through the perspectives of the witty main characters, this funny and fresh debut explores the power of stage personas and secret spaces, and speaks to the uncanny ways in which friendships transform us.

I was fortunate enough to receive an eARC from both BookishFirst.com and through NetGalley in exchange for an honest review. Any quotes in this review were taken from an uncorrected proof and may be different in the final publication. Thank you!

Spoilers ahoy, so please jump to my final thoughts to avoid those.

Have you ever read a book where so much of what the narrative wants you to believe about a character is forced on you by declarative statements, but not actually enforced by the text? It’s something called Informed Attribute and it’s just not fun or engaging or great for making your protag likable.

So in The Art of Escaping we have Mattie. She doesn’t like much of anything until she falls hard for escapology and this drives the entire plot of the book. Coolcoolcool. This YA book avoids love triangles or primary romance of any kind and it’s just straight up teens having adventures over the course of a summer and that’s refreshing. But I can not find it in myself to like Mattie in the end. She’s an asshat, and sometimes the narrative addresses that (usually not by having the characters talk to each other), but in other glaring ways, the narrative doesn’t.

This whole thing comes from Will about Mattie:

“But I didn’t have to, because Mattie made it okay. More than okay, because that’s the magic of Mattie. She resides at that strange little way station between stark reality and larger than life fantasy. She wants so much more than just-the-facts-ma’am. She lives for those miraculous moments when you stumble upon something that’s somehow truer than the truth.”

But I didn’t get that from the story itself. Escapology, how it was presented in this book, and excelling in it and finding fulfillment through it, just didn’t equate to this “magic of Mattie” persona for me. It was an unfortunate trap I think, of the informed attributes and the narrative style, that Mattie’s love for escapology pretty much became Mattie the character. That’s all I got from her, other than she was really dishearteningly mean-spirited, intentional or otherwise, to those around her. Maybe I read too much into those statements from Mattie, but they really irked me.

SO. Now that my biggest issue with this book is out of the way, here’s all the stuff (characters) I liked //

I liked this story for all the little things it did refreshingly different: the plot focused on friendships, and figuring yourself out through what you love, what inspires you, rather than through a person or relationship. Overall, it was a pretty cool story, but I couldn’t get over how the narrative wanted you to feel one way about Mattie the protag, when her internal thoughts and outward actions were pretty harshly the opposite.

If Leslie Knope had fluttered into the narrative to tell us Mattie was:

I would have believed it. Instead we got the narrative and a less-than-Knope character telling us that Mattie was the bees knees, when really she felt like she was just her escape act and some mean-spirited thoughts towards the woman who gave her everything.

If you liked or loved The Art of Escaping more than me, that’s awesome! These are just my opinions, truly curved by a hard-to-like protagonist. All of the side characters and the tropes that the story sidestepped, kept my rating at a solid three.

So check this book out if you’re looking for a pretty quick, breezy summer read. And, either way, don’t forget to treat yo self to some ice cream or peanut butter cup s’mores or what have you after.

If this book imparted anything on me, it’s that you deserve to be happy and to be able to share your best self with others. So, that’s nice. A nice solid three star thumbs up.

Have you read The Art of Escaping? What did you think? If you could perform anything on stage/for an audience, what would you do? I think I’d love to do a dramatic reading/skit of The Walrus and the Carpenter à la Alice In Wonderland (1999). I definitely wouldn’t be brave enough to attempt an escape act.

6 thoughts on “The Art of Escaping Review”