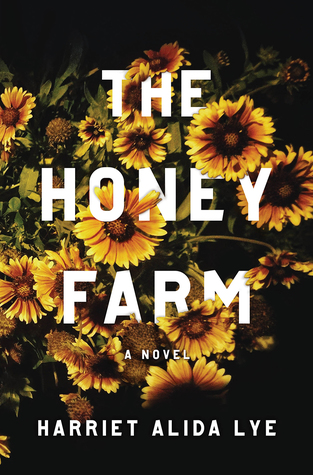 Synopsis: The drought has discontented the bees. Soil dries into sand; honeycomb stiffens into wax. But Cynthia knows how to breathe life back into her farm: offer it as an artists’ colony with free room, board, and “life experience” in exchange for backbreaking labor. Silvia, a wide-eyed graduate and would-be poet, and Ibrahim, a painter distracted by constant inspiration, are drawn to Cynthia’s offer, and soon, to each other.

But something lies beneath the surface. The Edenic farm is plagued by events that strike Silvia as ominous: taps run red, scalps itch with lice, frogs swarm the pond. One by one, the other residents leave. As summer tenses into autumn, Cynthia’s shadowed past is revealed and Silvia becomes increasingly paralyzed by doubt. Building to a shocking conclusion, The Honey Farm announces the arrival of a bold new voice and offers a thrilling portrait of creation and possession in the natural world.

Oh, this story starts out so well. Lye’s descriptions of nature are incredibly detailed and tactile // you can hear the drone of the bees and feel the stifling air that comes with drought. I was immediately drawn to Silvia, our protagonist, because of her desire for familial and creative freedom. Throughout the majority of the novel, she seems a little genre savvy – she senses time and again “the thrum of weirdness” that Cynthia, the farm owner, has created (cultivated?). And her musing on not being able to write at all is, sadly, very relatable.

“[Silvia] knows [her parents] love her, of course they do. But she’s realizing that perhaps love means something different to them than to her.”

Our deuteragonist is Ibrahim, a painter, and for the majority of the novel I liked him a lot, too. Whereas Silvia is wide-eyed in her naiveté, Ibrahim was curious and endearing because he wanted desperately to understand everything around him. His relationship with his father is a strong aspect of the book, as well.

“Nothing exists for him until he paints it.”

The atmosphere of this book, the sense of unease and biblical madness and cultish tendrils, is what continued to draw me through the narrative. I was a bee bumbling along all the pretty words, delighting in this or that flowery description, and waffling happily through the relationship between Ibrahim and Silvia (which in the first half of the book was solid in more ways than one). In the second half, I felt my lil wings itching, growing tired, and I began to spiral in my enjoyment, down and down, until I smacked into that ending, or lack of an ending, and finally was just laid up on a windowsill, going “dang, that’s it?… Can someone let me in for a kip?”

Honestly, this was a solid four star book for the majority. And then, as the ending rushed ever faster towards the reader, and even though there were some wickedly awesome/creepy dreams and mental twists happening, I was starting to worry and to feel that rating tick lower. Unfortunately, all that mystery and suspense and genuine fear for our protagonists got lost somewhere. So much buildup for a defeated sigh of an ending. I didn’t need every loose end tied up, but I could have done with less of the wall-headbanging inaction that every character displayed.

If you’re looking for a summer read that’s heavy and cloying and addictively sticky-sweet, that will plummet you down into deliciously descriptive doldrums, then give The Honey Farm a try. I enjoyed the fall. And the ambiguous-ness of the ending might work for you. I’ll definitely pick up Lye’s next book. She has a beautiful, unique grasp of language, where characters come to life in just a sentence or two.

“She’s written exactly one poem in her life, but maybe this is all she needs. Everybody has to believe in something.”

“His nose piggied up against the windowpane, he stares out at the view, dizzied by the beauty of it.”

2 thoughts on “The Honey Farm Review”