The lovely Kellie over at her bookshelf inspired me to do this post. Go check hers out!

When I was a kid, books felt more real to me than my own life (and that’s still fairly true to this day). Authors that envelope you in their words and whisk you away to their fully developed worlds are amazing people. I hope to one day join their ranks, but until then, here’s a list of some of my childhood and teen favorites.

The Claidi Journals by Tanith Lee 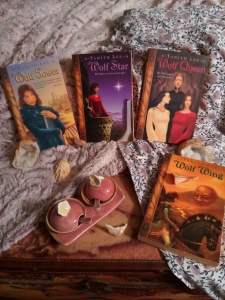 Tanith Lee *swoon* Her books are poetry. Her worldbuilding is maddeningly impressive. I love almost everything I’ve read by her, and she wrote so many books and short stories in her life, I’m still working through new-to-me ones. The Claidi Journals were the first books I read by her. They are a series of four books that follow the titular Claidi through a futuristic world populated by wonderful villainesses and ardent love interests, castles that shift rooms and castles that fly, and hybrid animals from horse-giraffes that burble to tiny rabbits and hippos that serve dinner. It’s written in first person, a diary of sorts, and it is the height of first person writing. Introspective and action-filled, and Claidi’s voice and personality are wonderful. There are so many twists and wicked fun locations and great characters // ugh, my heart. Every time I go back to this series, I’m completely drawn in and transported. I’m so glad little eleven-year-old me took a chance and bought this series purely from their covers. 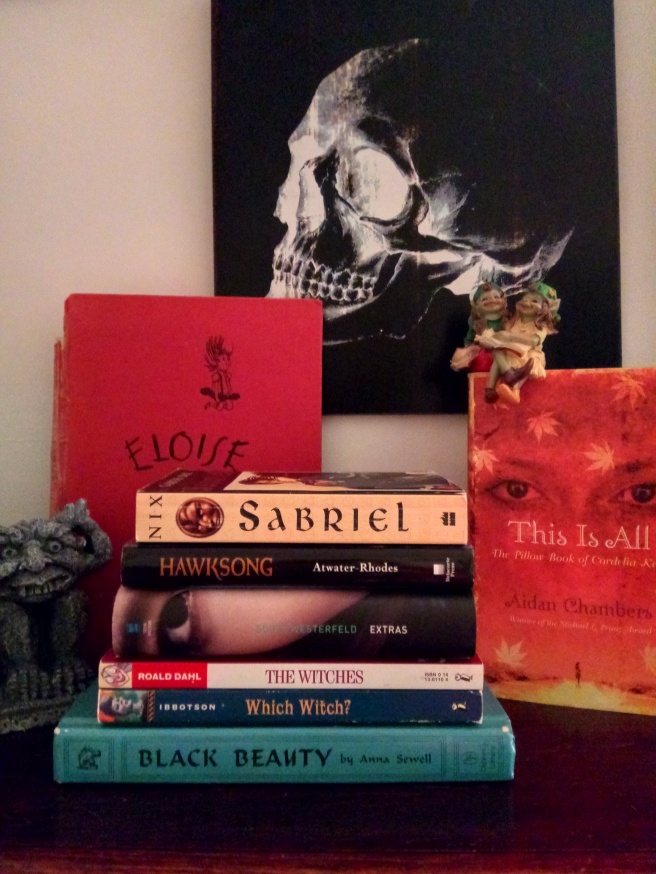 This is one of the books I vividly remember my mum reading to me (also Caddie Woodlawn). I have a terrible memory of my own life. But I can still feel what it was like to rest my head on her chest, to feel the words thrumming out of her and through me. I can remember looking up and just watching her lips as they formed words and her accent was much stronger then. The copy in the photo is inscribed to me from two family members that have passed. And my family is so strange about death and holding on to the little we have left that… I don’t know, I guess Black Beauty will always be tinged with sadness and regret for me, regret for things lost, and the book has those moments, as well… I also have an edition from I believe 1906, and it just says “A. Sewell” and has basically nothing in the front, it just jumps in to the narrative, so I think that’s cool.

This is another one tied to family, my grandmother. She passed… wow, back in November, when I was out of state. My dad’s mother, and he’s had a falling out with his brother and brother’s wife, and just. I don’t really know what to say, other than it’s always been tough to see how small my dad’s side of the family has become, and how big my mum’s family is in England and Australia and I’ll likely never see them again. BUT what I was getting at here is that my grandmother gave me her copies of three of the Eloise books and I added to the wear on the spine and pages with how much I read them. Eloise. Eloise. Eloise. I lovelovelove this book series and the art style – perfectly captures a six-year-old’s loosey-goosey, dashing to and fro, inquisitive, a n n o y i n g, boundless, creative, mostly happy being. (Eloise is separated a lot from her mum, too, but at least she has Nanny, her mostly companion, and all the residents and employees of The Plaza Hotel (a Plaza that was 30 years prior to Drumpf (and I only say this because he’s in Home Alone 2: Lost in New York (and The Little Rascals), and my brain makes random pop culture connections, and I used to say that the worst parts of those movies were him, but does that joke even matter any more* and uh ahaha wuuuh I’ll stop.))) (Parentheses.)

The two movies they’ve made (with Julie Andrews as Nanny!) are super cute. And I just learned that Liza Minelli was Thompson’s goddaughter, and is the lil girl Eloise is modeled after, and AND THAT’S AWESOME.

*the link is to an SNL skit featuring Jessica Chastain as the host of a game show What Even Matters Anymore and Kenan Thompson as Bernard, a delightfully content fellow who’s delivery is mah fave

Kellie is the best and just informed me that THERE ARE GOING TO BE FOUR MORE BOOKS set in this WICKED BUBBLY futuristic world. This is my number one young adult dystopia because it’s tricksy and twisty and so well done with all the technology. I want so much of it. (I’ve been screaming about hoverboards since Back to the Future and then in 2015 when we should have had proper ones and now also THESE BOOKS.)

I still really love Tally, and I love how she’s kind of a peripheral character in later books, so we’re still getting her story, but also gads of new, interesting characters. I still think Shay was done a disservice by the narrative, her whole story arc could have been handled better, but maybe that’s a tangent for a review.

I can’t gush about these books enough (although I’ll stop in this post before it gets oot of hand.) I just LOVE THIS FUTURE so much, every part of it. Even the SpagBol.

R O A L D D A H L especially The Witches, Matilda, and James and the Giant Peach

These books are (my) childhood and imparted so many great lessons on me as a kid about families and how different they can be. They are a part of me and definitely shaped me as a human. Love love looooooove

Which Witch by Eva Ibbotson

Has anyone seen I Want to Marry Ryan Banks, a lil TV movie from the early 2000s starring Bradley Cooper, Emma Caulfield, and Jason Priestley? It’s super cute and well-acted and believable?? And I don’t know why my mind went there other than Which Witch is about basically a dating game amongst all of these goofy and evilish witches who want to marry Arriman the Awful, the hottest eligible bachelor in Todcaster, England. The witch that performs the evilest, darkest bit of magic wins the dude. It’s a fun, silly story with a couple of sweet, heartwarming twists. As much as I love horror, I love the spoopy stuff, too.

Actually, I’d recommend anything by Ibbotson. Journey to the River Sea, Island of the Aunts, The Secret of Platform 13. They’re very white, very British books. The characters and magic are great, though.

And now my mind is thinking of Which Wich, a local sandwich shahop. Hmmmmm.

This Is All by Aidan Chambers

So, This Is All is a doorstopper of a book. It’s several “books” in one, because the main character, Cordelia, has been inspired by the Japanese tradition of pillow books, and she writes about e v e r y t h i n g. As a teen reading this, I was enamored with her voice and musings and just all of the information that’s trotted out like the friendliest, most engaging slow parade of a read. When I flipped to the back of the book and found out the author was an 80-year-old gent, I was flabbergasted. How did he write a teenage girl so well?? This wasn’t Chambers’ first book, and I love the rest of his, and quite a few of them have LGBT characters. From the few interviews I’ve read, he talks to everyone and listens and really tries to respect and write real people as his characters. I do want to go back and reread This Is All as an adult, because I wonder if my opinion on his handling of certain topics would be different, but we’ll see. It also has one of the best ambiguous endings I’ve ever read.

The Abhorsen Trilogy by Garth Nix

What a wonderful magic system! This is yet another fantasy story where a wall separates the magic from the technology (early 1900s England-inspired), but past that, it’s so detailed and haunting and powerful. The first one also has one of my earliest ships, before shipping was the terminology. And I don’t want to spoil the pairing, but now I’m laughing to myself because SHIPS.

The Kiesha’ra Series by Amelia Atwater-Rhodes

I grew up with this author’s vampire books, which she started when she was 13, and it shows, but they’re fast, detailed, and mostly fun. I burnt myself out on the stuff she wrote after her shapeshifter one – pretty repetitive and I started forgetting who the f/// anyone was, or caring for that matter.

But I’ve read the shapeshifter series that starts with Hawksong several times now, and I think her writing and world-building are strongest in this set. The first book is straight-up Romeo and Juliet with birds and snakes, but the mythology and diversity grow from there. If they (the Telly Gods) ever made this into a decent genre TV series à la Shadowhunters or From Dusk Till Dawn, YES PLEASE.

Honorable mentions: Tamora Pierce (everything, but I started with her Wild Magic series as a kid); Meghan Whalen Turner (I’ve only read The Thief and part of the second book, bad Cade, but really loved her spin on a Greek-inspired setting); Charles de Lint (he just writes so much ya’ll and like Atwater-Rhodes, it all starts to bleed together so pick a couple and you’re good on some urban fantasy from him); Peter Pan, Beatrix Potter, Winnie the Pooh, The Hobbit, Nancy Farmer ////

Huzzah, those are the big hits from my youth! What books shaped you as a kid? Ones that you still return to fondly? Have you read anything I crowed about?

9 thoughts on “Favorites From My Youth; or This Post is Chock Full of #nostalgia”